SR:  Good afternoon.  This is Dr. Stella Russell with my very special guest in his own studio on Greenwich Street in Greenwich Village, New York.  I have Mr. Robert Smithson who is a pioneer in the field of earthworks.  Mr. Smithson, would you tell us something about the Spiral Jetty in Utah?  How did you build it?

RS:  Well, the Spiral Jetty was built in April of 1970 and it’s in the Great Salt Lake in the northern part of Utah, near the Golden Spike monument.  The actual construction took two weeks.  The land that the Spiral Jetty is on is a shelf of clay that extends into the Salt Lake and the coil of rocks was dumped into the shallow area in order to get the spiral formation of the Jetty. I used two dump trucks, an excavator and a front loader, to construct the work, and these machines were sent in from Ogden, Utah, which is about 150 miles from the site. The Jetty exists in red water. The water is red because of a heavy algae content and in the late summer salt crystals grow on the basalt rock that the Jetty is made up of.

SR:  Well, in other words, then, the earthwork undergoes some changes during its lifetime, some kind of metamorphosis.  Is that integral in your idea when you plan the work?  Are you aware of what changes you can foresee?

RS:  Yes. Yeah, I can work with certain changes, certain climatic conditions, but there are certain unexpected things that happen. The lake right now is at its highest level in 75 years, so that the Jetty is semi-submerged, but as the summer comes on, the water evaporates and leaves the salt crystals, and the water gets redder as you go deeper into summer.  The entire Jetty, last time I saw it, was entirely out of the water, and entirely encrusted with white salt crystals over the entire surface.

SR:  Is there a life expectancy, is there any limited life expectancy to the work, or can we anticipate that as long as Utah is still with us in the United States, so will the Jetty be?

RS:  Yeah, it should be there indefinitely in some form. The basalt rock that makes up 80% of the Jetty will remain there. The Jetty hasn’t eroded or lost its shape, but it does go in and out of the water.  Also the water is a brown color in the winter rather than the red in the summer.

SR:  Which is about the major change, at least in coloration.  I understand there is another work in Holland, which is related to it. Could you tell us about that?  And what is it called? 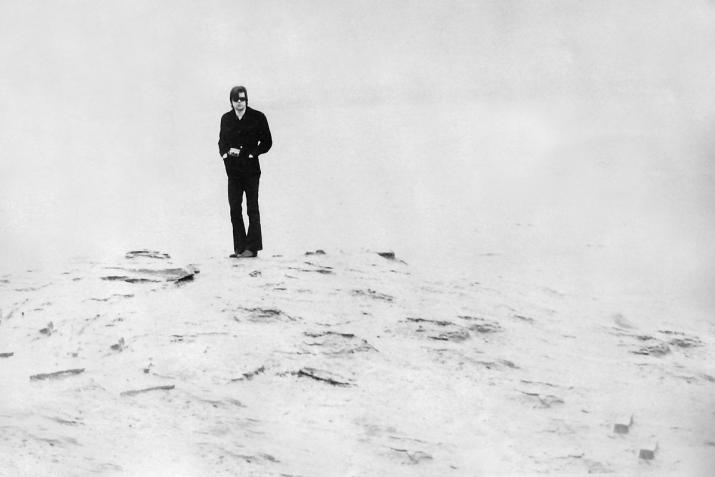 RS:  It’s called Broken Circle in Spiral Hill. The Broken Circle consists of a curving jetty and a curving canal.  That is built on the edge of a manmade lake and a working sand quarry; and overlooking that is the Spiral Hill which is a mound of earth about 70 feet at the base, and winding down around the Spiral Hill is a path of white sand that goes to the top. From the top of the Spiral Hill you can look down and see the configuration of the Broken Circle.  This was done in a working sand quarry. The miners built the piece right in with the process of the mining itself, and they are looking forward to a day when the area will be converted into a recreation area, so that there is a very good sense of land use.  The Spiral Hill actually right now has a ground cover growing on it, and the surrounding areas will eventually have grass growing on what is now pretty much raw earth. The Broken Circle is reinforced in a manner that the Dutch use to reinforce their canals.  There are not many rocks in Holland, so we used wood to stabilize the Broken Circle.

SR:  If I’m reading you correctly, I seem to sense some relationship with the land in terms of bringing it back into somewhat of a natural state.  Is there any correlation or any connection between your earth sculptures and reclamation?  If so, what is it?

RS:  Well, right now, I’m also interested in extending this idea into the reclamation of strip mining areas. There are more than 4 million acres of strip mine land throughout the country, and the reclamation so far has been rather devoid of art and rather banal.  I have tried to interest certain coal companies in the project, but they’re not quite as receptive as the Dutch, I’d say.  Although there are people who are interested in it, and I expect sometime in the future there will be an attempt to integrate the earth sculpture into the mining reclamations here.  The Dutch of course have been always working, manipulating the land, so they’re more familiar with land use.  It seems that in the States here, on one side you have either the extreme preservationist ecology groups operating, and then on the other side you have the rather blind profiteering, and there seems to be no connection, no dialogue between the two areas.  So I hope to create some consciousness in that area.

SR:  I’m sure you’re going to.  Well, you’ve already accomplished something, so there’s no reason why it shouldn’t continue to be productive.  About four or five years ago, in collaboration with Sam Hunter, I attended a series called Critics Choice, and at that point you were discussing a different kind of project, one of which involved Alfred University.  Could you tell us, please, something about that project?

RS:  Yeah. That was a small project, actually.  It was essentially manual. Rocks were collected, and then placed on a quagmire of quicksand actually.  There was a crust on the quicksand, so that the rocks sunk very, very slowly.  The configuration was of an ancient continent.

RS:  Yes, I believe it was Lemuria, a lost continent from prehistoric periods. It essentially was more of a tentative piece.  It didn’t involve the mass and scale of the larger pieces.  It was more instructional, you might say, than major.

SR:  Well, the tendency in today’s world, in particular the art currents of today, is toward the monumental in scale.  We seem determined to make vast inroads on earth, water, and sky. What projects would you share with us that you entertain for the future?

RS:  I do hope to do a piece outside of Chicago, working in a new town, in a peat bog, actually. It would be a matter of integrating an artificial lake that I would design and construct over a period of two years in this new town. That would be rather different from the other projects, as this would involve housing that would be built up around the piece.  I think it’s a rather exciting project.

SR:  You’ve had various shows, and yet it seems to me to be a very difficult thing to exhibit work which is largely of the earth and in the site which you’ve selected.  How do you accomplish an exhibition?

RS:  The last exhibition I had was of the movie of the construction of the Spiral Jetty, among other things. There was also a viewing of the Spiral Jetty from a helicopter, so that one could get different kinds of scale relationships through the movie that you might not otherwise get.  The movie also deals with aspects of the site: its geology and prehistory, and different thoughts that I have about such things. The film itself runs for 35 minutes, [with] color and sound, and in a sense the movie acts as kind of a map that tells you where the work is outdoors, and that relationship, I think, I’ve been interested in right along. The earlier works have been based on what you might call a dialogue between the outdoors and the indoors.

SR:  It’s been increasingly difficult for me, in teaching art history, to separate the traditional media of architecture, painting, and sculpture, and I’m curious to know how you relate earth, sky, and water works with, perhaps, concept art.

RS:  My work actually is not involved in simply making up ideas. There’s a physical practice that comes to bear on the whole thing.  I’m not interested in reducing art to a set of ideas.  I prefer making something physical and in the world and part of the process of the world, so there’s no real retreat into simple mental exercises, which I think a lot of conceptual art is. It’s not, if I was to characterize my art, I would call it dialectical, meaning art that’s changing but rooted in the material basis, unlike concept art that’s really a feat of ideation and mental programs, you might say.

SR:  Well, yes, you might.  How did you come by your form of art expression, Mr. Robert Smithson?

RS:  I started, I was always interested in art.  I began as a boy being interested in natural history, and found that was really an aesthetic interest made scientific.  I had my first show when I was 19 at the Artists’ Gallery.  I met Frederica Beer-Monti at that time, who had been associated with the German Expressionists like [Oskar] Kokoschka.  So that was rather encouraging. I mainly developed on my own, didn’t learn any of these things from courses or schools, even though I did go to the Art Students League for a while. The main thing I think is just to have exchange with other artists whom you happen to be interested in.

SR:  Well, you’ve been in the forefront, certainly, of this form of art, and I’m curious to know if you envision any change of direction.

SR:  In your form of art and in the art surrounding you to perhaps bring all into greater communion?

RS: Yes, I think art will become less isolated and deal more in relationships with the outside world. That’s what I’m interested in doing, getting into areas like the mining area, that’s normally considered completely devoid of art, and reclamation situations.  I think that would open up new areas. 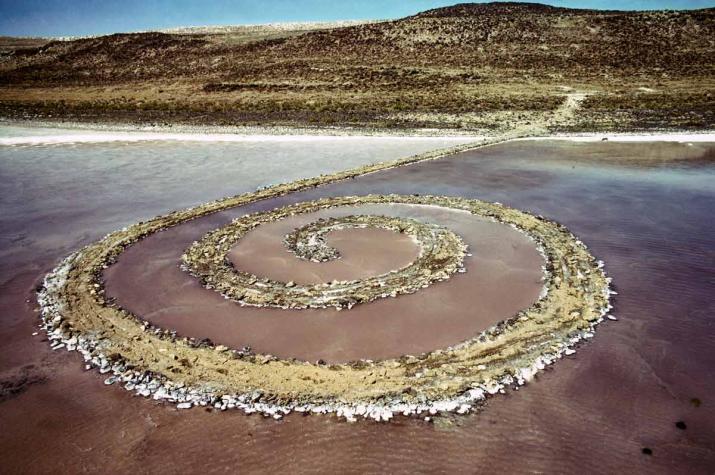 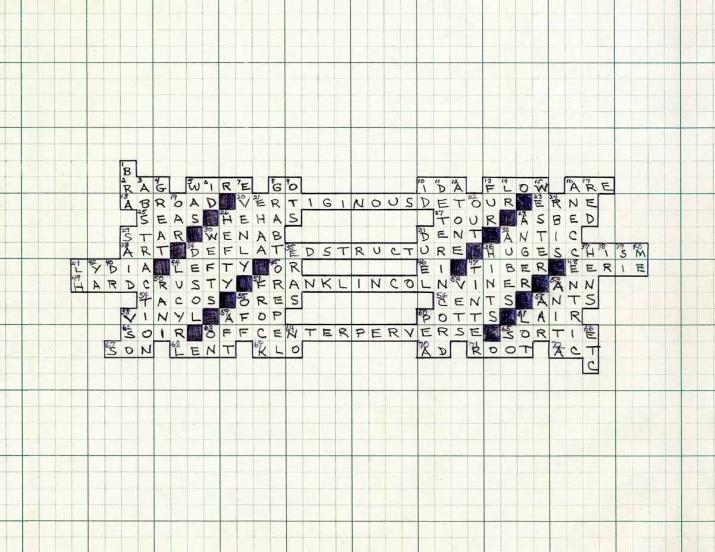